My project addresses part of the Sc2 primary science curriculum “Life Processes and Living things”. Billy seeks advice from his father about how to complete his homework about living and non-living things and they explore the various things they can observe around them.

Age range of audience: Early Key Stage 2 (7-9 years) Sophistication and speed of dialogue is probably too advanced for younger children, despite the subject matter being largely accessible. 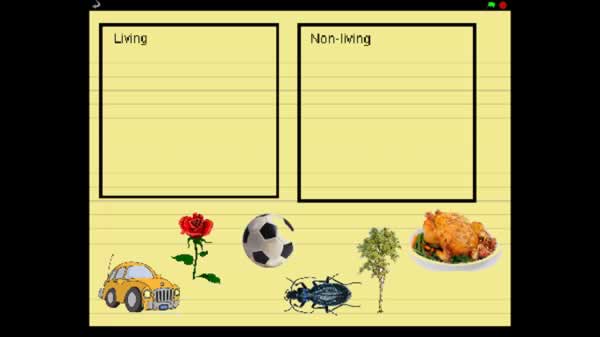 I ran a session for dads to show them how we were using Scratch in the school. This was the invitation:

We are celebrating Father’s Day with a special event to challenge all dads to make IT happen!

Are you a dad who has a passion for computers?

Do you want to find out more about the latest education software?

We will be exploring SCRATCH, an innovative, visual, tile-based programming tool which provides an introduction to programming for children.

Make characters move across the screen and talk to each other.
Please inform the office if you are able to join us for a day of computer challenges.

Fathers do IT – lesson plan

• Show “living and non-living things” presentation on big screen to show the group what Scratch is and what can be done with it. Draw attention to the ‘script’ in the side panel which represents the programming. Explain that for each movement or action I have told the sprite how, when and where to do it.

• Quick guided tour of the main functions – control, motion and looks (explain we will be ignoring the others in this session) Also show how to select a background.

• Show how to move a sprite from one side of the screen to the other and challenge pupil-father pairs to do the same on their computers.

• Challenge pairs to do the same but to then move the sprite back to the starting position again.

• Stop groups working and show them on the big screen how to use character speech. Challenge them to use speech (or thought) bubbles in their animations.

• Introduce alternate costumes and additional characters. Show how each new sprite requires its own block of programming script.

• Challenge pairs to create their own short animation including at least 2 sprites, movement and dialogue.

• Pairs showcase their animations on the big screen. Encourage them to talk about what was difficult and how they got around any problems.