A project by Sarah Michael. 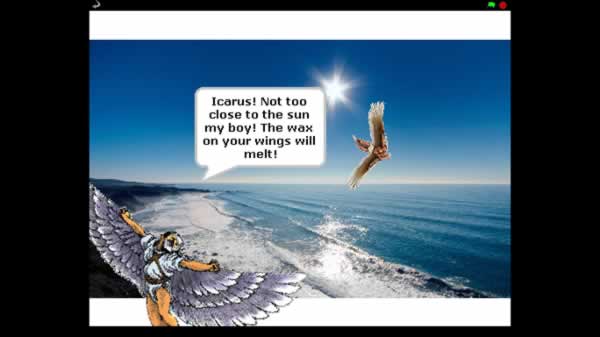 Sarah's Analysis of how the project went

1. How has this project impacted on your personal learning?

I feel very positive about the progress I have made with the Scratch program. I was able to overcome some initial challenges. My original idea was to use the Scratch program to introduce younger children to some classic stories including Shakespeare. I originally intended to retell some of the most famous plays such as Romeo and Juliet and A Midsummer Night’s Dream through more modern characters and using modern music which the children may be familiar with. However in the initial stages of using Scratch I found it quite difficult to import music files and also began to realise that even small movements and basic speech can take a long time to choreograph using the Scratch program. I realised that if I was going to use Scratch to retell stories for the purpose of literacy it would have to be on a smaller scale. Fortunately for my placement at the time I was in a year 4 class who were studying Ancient Greeks as their class topic. It struck me that I could utilise the stories of Greek mythology to enable their topic learning to be more cross curricular using Scratch to encompass topic, literacy and ICT simultaneously.

2. What problems did you encounter, and how did you resolve them?

It is my understanding that the changes to the curriculum which will be in place in September 2014 will create a difficulty for primary schools in terms of the appropriate way to include ICT. As it is Gove’s plan to demand the inclusion of computer science but with little or no guidance on how to teach it, I feel that Scratch is an ideal solution to this problem as it can be worked into to the curriculum through other subjects and is a fun and exciting way to introduce computer science, a subject which may be initially daunting for both teachers and pupils. I feel that Scratch could be used for a variety of subjects some of which we have explored through the project but some of which, particularly foundation subjects such as Art for example could be explored further, as Scratch lends itself to encouraging creativity from the students. There could be units of work planned around designing sprite characters and backgrounds. The program could also be used for Key Stage 2 Maths exploring the use of the x and y coordinates to move the characters around the screen. I feel that in some cases teachers are not motivated to teach ICT as they struggle to find ways to make it engaging for the children, I have seen this first hand on my current placement, I feel a program such as Scratch is ideal to motivate both teachers and children to engage with and enjoy using ICT for many subjects. I feel that we could have improved the project even further by dedicating some of the time allocated to specialism to going into our placement school specifically to explore the use of Scratch with our class or focus groups of children. I know this would have benefited me as I did found it very challenging to fit in time to use Scratch with my class amongst all the other things which are expected of us on placement and also given that ICT was not a high priority in either of my placement schools. Upon joining a school as a member of staff in September I fully intend to plan schemes of work using Scratch as our main resource for teaching ICT and include cross curricular Maths and Art initially and hopefully more subjects throughout the year.

3. How have you actually developed this in your classroom?

My initial plan was to enable a group of SEN children in my year 4 class to access the learning of Greek myths through the use of Scratch to retell and create their own work and then enable them to take ownership of their own learning by presenting their work to the rest of the class. This would hopefully also build up their esteem within the year group as they would rarely get an opportunity to present work or ‘teach’ their peers. In practice there was not as much opportunity as I would have liked to work with the children in the ICT suite, partly because they were often already out of class attending interventions. However I was able to introduce the children to the Scratch program and show them some of my work. One child responded particularly well as, despite having very limited literacy, his visual understanding of stories exceptionally high compared to his general cognition. Therefore, using this example as a specific case study shows the benefit of using Scratch to initiate understanding in literacy especially for SEN children. I could see the immediate benefit for these children as they were much more engaged in the following topic lessons after having been introduced to the stories through the medium of visual ICT (Scratch).