A project by Patrick Hayes.

With the move towards computer programming in the new curriculum, we were challenged with assembling a project on scratch that would be accessible and enjoyable to all students. Ideally, it would be cross-curricular. My Scratch project is based on a maths riddle on the lowest common denominator. An old farmer dies and leaves his 17 cows to divide between his 3 sons, who struggle to work out the fractions that they each deserve. I expanded the riddle to include more characters and a moral (not to be greedy) to make the riddle seem more story-like and enjoyable. 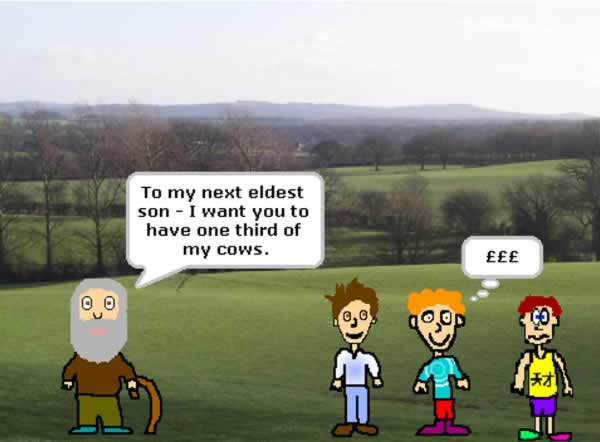 Patrick's assessment of the project

1. How has this project impacted on your personal learning?

What went well?
I am glad that I chose a story quickly, as a lot of time would have been wasted on the actual writing of a story if I had started without a clear plan in mind. I drew all of my own characters. I used my flatmates to record some of the sounds in the project when I could not find the sounds I wanted online that weren’t under copyright. I think the story is entertaining and suitable for a high Key Stage 2 audience.

What did I find challenging?
Timing is the biggest challenge that I faced with this project. As soon as you get past one minute or so, it becomes extremely boring and time-consuming to watch the same part of the project over and over again just to change one tiny thing at the end.

As we were teaching ourselves how to use scratch and learning as we went, there were lots of things that I wish I had known before I started that would have saved me a lot of time. For example, I had 18 cows and each had similar commands. Initially I drew one cow, then copied and amended it – changed the size, the direction, the pattern, etc.. If I had put in the commands before I copied the pictures, I would not have had to drag them all across again and could have just tweaked them.

It can be difficult to find sound files online that do not have a copyright attached, but it is possible. It would be a good challenge for students to make their own music and record their own sounds (My flatmates and I recorded some of the sounds).

Similar to the sound files, I did not want to use images that were under copyright and the stock files on Scratch are overused, so I decided to draw my own characters. It was a time consuming process, but would be great for students to do.

What did I learn?

The importance of planning out what I was going to do could not be underestimated. I knew exactly what I had to do and never had to sit in the lab wondering what to do next.

I think greater emphasis should be placed on creating original art work and music files, as when it comes to using this in schools, most schools have very limited access to the internet and children will be less careful about copyrights and the type of files they take.

2. What problems did you encounter, and how did you resolve them?

One of the biggest problems I faced with this project was that I started it before I really knew what I was doing. While it was useful to pick it up as I went along and the plenaries were useful, if I was doing it again, I would definitely have watched more online tutorials before starting to assemble my story, as I think it would have saved me a lot of time over the course of the specialism.

3. How have you actually developed this in your classroom?

I am currently in a Year 2 class on placement and I don’t think they are quite ready for Scratch. I have however used one of my classmate’s projects (Living and Non-living Things) with my class as part of a science lesson and they really enjoyed it.

If I was in an older class, I feel confident that I would be able to use scratch well with them now and make suitable lesson plans. There is so much room for differentiation within Scratch as the work is endless. You could keep adding commands to make it more detailed.

I also feel that Scratch would be an ideal after-school club for interested pupils. It is enjoyable for children (and adults) and there are endless possibilities when it comes to applications for it.