Materials by Teachers in English - Primary 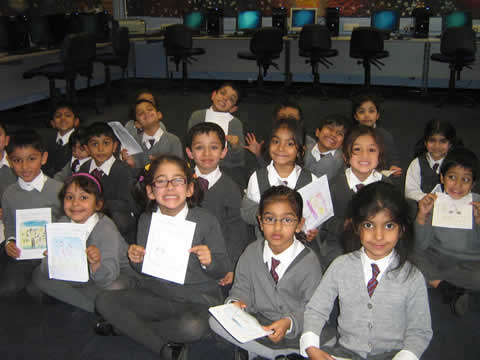 Lessons to develop the Key Stage 1 materials for the “Literacy from Scratch” project were taught by the Year 1 and 2 classroom teachers at Swaminarayan School, West London, and took place in a fully-equipped ICT suite over a timetabled lesson of one hour each week.

Students at the school are very motivated learners who are quite varied in their existing abilities with ICT equipment, and the frequency of its use at home. Some parents are generally apprehensive about allowing their child to use a computer at home, so those students arrive at school with limited skills and experience. Some children, on the other hand, have their own iPad or laptop, and so they have far greater experience in ICT usage, and are even able to teach me a thing or two!

It was with some trepidation, therefore, that I agreed to assist Lawrence with his trials in developing a scheme of work to be used within schools, based around computer programming. I have never had any experience with programming before, so was apprehensive about the task ahead, and the abilities the students would be able to demonstrate, at such a young age. This, of course was the purpose of the trial!

For Year 1 students, in the first few weeks of ICT lessons, the focus has been extensively on being aware of various aspects of a computer and being able to log on and off the school system. They were then being asked to jump straight into using the Scratch program – a daunting task for any five-year old, not to mention their teacher with a distinct lack of computer programming experience!

We found that the foundation of basic ICT skills, which I normally teach, still needed to be there. Each week, we would go through the steps of logging on, so that all the students would have that knowledge ingrained, and be able to increase their speed in order for there to be a noticeable progression in their learning. We introduced them to the concept of Scratch after a couple of foundation lessons in Microsoft Word and a Paint-like program called Granada Colours, already available on the school network, and a part of my introduction to computers at the school . Most of the children were, by that stage, able to log on and off the computers, open a program from a list, and select the tools they required to complete an activity (such as ‘draw a winter scene’ or be able to change font, size and colour when writing in Word). In order to set up the foundation base of knowledge to introduce the ideas of the Scratch program, students were asked to create characters in Granada Colours based on familiar stories, texts being studied in English or their own imaginations. This was to inform their abilities in creating ‘Sprites’ in Scratch (See Note). Some more able students were shown how to save their work within the school’s directory in their own folder.

During a week of English lessons, the Year 1 class completed a study of a text and were required to create their own versions of a story where a toy was lost. In the stories created in English, the two main characters were themselves, and their toy. There was to be a setting for the beginning of the story; a second scene when the toy was lost (middle); and a final scene when the toy was found (ending). Each child published a mini-book of their story throughout the course of the week. Lawrence and I decided this would form a useful basis for their Scratch projects, as it suited the structure of what they were required to do. We recommend this approach: starting in literary stimulus, prior to creative responses in writing, then their Scratch stories.

The subsequent lesson was used to complete the Sprites in the Paint editor, if they had not already done so, and to introduce the students to the concept of the ‘Stage’ and creating a Background. This was an abstract concept, made more concrete to the students due to the links made through discussion about puppet shows which they had completed in English earlier in the term, and in which I created a ‘background’ (small b for normal use!) for each puppet show, and the children performed on the ‘stage’ using puppets (i.e. ‘Sprites’). The previous puppet show learning in English was invaluable here, as it helped form concrete links for the students with regards to what we were attempting to create in Scratch. We used Paint to create the Backgrounds, and save them. The following week we had the students import their Paint files from where they had saved them into Scratch, in order for them to become useable Backgrounds in their projects.

Over the course of the following two weeks, students all completed their two Sprites and imported their two Backgrounds from the directory in which they saved it. More able students worked with Lawrence and me, experimenting with movement and giving commands to the Sprites. The ‘saving work’ concept’s importance became very apparent to a couple of students who did not remember and were perplexed when they could not access their work the following week – a very valuable lesson to learn!

In summation, I never thought that five year old students would be able to progress as quickly, and with as much innovation, enthusiasm, and focus as my students have. They are all so proud of their work, and we hope our experience will aid you in assisting your students along their Scratch journeys towards success in the new Computing curriculum. The best advice I can give you is to embrace the concept of programming, and allow your students to work at their own pace, while giving them enough skills and information in order for you to give support to the ones who require it, while allowing the more able children the freedom to explore their abilities through the knowledge they possess and develop. At times, this process has been frustrating, with multiple hands in the air, and students calling out, “Miss Roberts! I need your help!” but I have seen such a massive progression in their skills that the calls have now become, “Miss Roberts! Look at what I can do!”

The students have been amazing, and have really astonished us with their abilities.
Donna Roberts

Note:
Capital letters used, such as B for Background, or S for Sprites or Stage, denote the use of the term within the Scratch program.