Materials by Teachers in English - Primary

Computers are increasingly becoming an important part of modern life. As technology advances and the necessity for knowledge of computational thinking and coding becomes even more significant, it is vital that the future generation of Britain has obtaining relevant computational thinking skills to better prepare them for life in the technological world. The new National Curriculum subject of Computing allows pupils to creatively explore computers in an investigative and progressive manner. In order to expand the endless possibilities provided by Computing I have conducted research into how algorithms can be introduced to Key Stage One pupils. In order to understand the expectations of the new Computing curriculum, I explored the programme Literacy from Scratch. The Literacy from Scratch website states, “Literacy from Scratch” is a response to the United Kingdom (UK) government’s initiative to develop computer programming skills in both the Primary phase of education (pupils aged 5 to 11) and the Secondary phase (aged 11 to 18)”. Following my analysis of the expectations of teaching the computing curriculum at Key Stage 1, I decided to focus on creating a programme which educates children on what algorithms are in a creative and engaging manner through exploration and inputting coding to debug a simple programme whilst using logical reasoning to predict and overcome potential challenges. 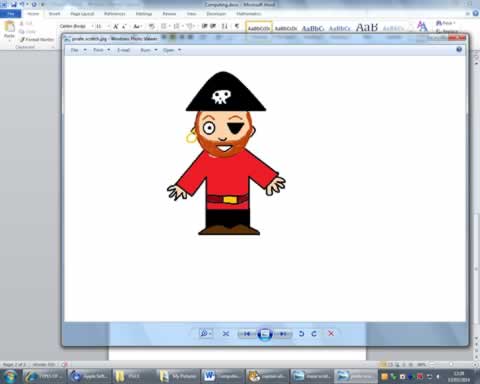 I created the character of Pirate Pete, an enthusiastic but lonely pirate eager to interact and make new friends, using the Microsoft software Paint. I then changed parts of the image (smile, sad face, wink, thoughtful look and so on) to give the character different expressions.

I then decided the concept of my programme would be a lonely pirate seeking help to reach a treasure chest full of gold, however unable to do this alone, he seeks additional support to guide him to the treasure chest using algorithms. The background of my Scratch file was a simple sandy path set on a remote island, this was illustrated in paint. You can see my simple background with a path to the treasure in the screen shot above.

- I initially thought that obtaining the correct co-ordinates and moving my sprite to the desired location would prove to be one of the most problematic aspects of using the Scratch programme, however once I understood how the motion and movement buttons worked and identified the best fitting combination co-ordinates to move my sprite to the correct location I began to find the process easy and definitely accessible to the targeted KS1 audience.

- Paint is an extremely simple yet effective way of creating and designing both sprite characters and backgrounds. I found it easy to make both my maze course and Pirate Pete character using the basic tools provided and range of colours contained in the paint colour palette.

What problems did I encounter and how did I overcome them?

- After importing my sprite character I found it difficult to erase all of the excess background around my character as any remains would show up on top of my beach background. It was a pain-staking process which took up much of my time. In order to overcome this, I would suggest keeping backgrounds and sprite characters very simple and somewhat similar in tone to make the blending and erasing process easier and less time consuming. Alternatively if you are short on time you can import a picture of your choice from google which will be added without the Paint issues I experienced.

In order to make my sprite remember the name of the child I had to link both the operator control with the variable control, this was quite challenging and required a great deal of thought linking the correct aspect to the right controls. Although it is unlikely that KS1 children will initially need to use variable and operator controls, I would suggest that any users become familiar with these controls on before adding it to the finished project in order to build some familiarity and knowledge with how the controls interlink.

How can this be used effectively in schools?

My Scratch creation not only educates children and teachers on what algorithms are, how we use algorithms and how we can use coding in a creative and innovate manner, but it opens up a world of programming to provide them with the freedom and skills to create their own stories and games.

Notes from the Course Tutor

These files are for use in the classroom. They can, of course, be adapted by teachers, with further resources, such as Sprites or Backgrounds, added by pupils.

I have included all the work of my teaching group here. There are many wonderful teaching ideas, and if we did not solve every coding problem effectively (none of us is an expert in Computing, including me!), the creativity of these young teachers more than makes up for it.

The teaching programme covered 30 hours of work at the computer, so if you start with one session of 60 minutes per week, you will become as proficient as they have been well before the end of your teaching year!

The key to success is to work with a partner, share ideas, and problem-solve together.